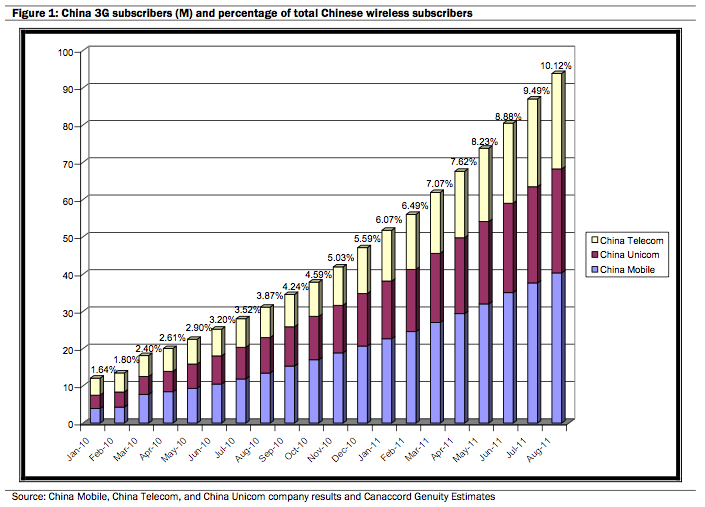 Today, three big state-controlled corporations, China Mobile, China Unicom and China Telecom, dominate the Chinese telecommunications industry. There used to be two additional players in the industry, China Netcom and China Tietong. However, on June 2, 2008, China Netcom merged into China Unicom and became its subsidiary after the latter sold its CDMA network to China Telecom. In addition, on May 23, 2008, China Tietong, which used to be the third largest fixed-line internet service provider in China, was taken over by China Mobile leaving only three players in the industry.

China Mobile was founded on April 4, 2000 and now boasts the world’s largest network. In 2011, China Mobile ranked number 87 in the Fortune 500. Its major service includes mobile voice and multimedia services. It operates a GSM network which encompasses all 31 provinces in China. Some of its well-known brands include Easyown, Go Tone and M-zone. As of January 2012, China Mobile is the world’s largest mobile phone operator with about 655 million subscribers. The acquisition of China Tietong added internet services to its core business. In addition, the 3G network it provides utilizes the TD-SCDMA standard, a 3G air interface that China Mobile helped develop.

China Unicom was originally founded on July 19, 1994 by the Ministry of Information Industry and kept its name after the merger with China Netcom. The company began as a wireless paging and GSM mobile operator, but now provides a wide range of services including nationwide GSM mobile network, long-distance calls, local calls, data communication, internet services and IP telephones in mainland China. Today, the company’s biggest advantage is its world-leading 3G license of the WCDMA network that it currently operates on. This differs from the TD-SCDMA that China Mobile uses and the CDMA2000 that China Telecom uses for their respective 3G networks. 77 percent of the world’s 3G market uses the WCDMA network. It also is the most commonly used 3G interface by most terminal providers in China in the manufacturing of their new mobile phone models.

China Telecom;s strength lies in its fixed-line internet service and the construction of CDMA2000 network. Because the equipment it purchased for its former 2G network all support CDMA2000 standard, all it needs to do in theory is upgrade its software to build a 3G network. On March 30, 2011, China Telecom’s customer base of CDMA users surpassed 100 million, making China Telecom the world’s biggest CDMA operator. However, the company also faces a great challenge in developing its users for the 3G network.