Although constantly increasing labor costs are decreasing margins for many companies operating in China, rising labor costs alone is not enough to topple the country’s immense manufacturing industry. China currently accounts for about 1/5 of total global manufacturing, more than any other country in the world. Unfortunately for many foreign companies that have outsourced their labor to China, labor costs are not as low as they used to be and will continue to rise. 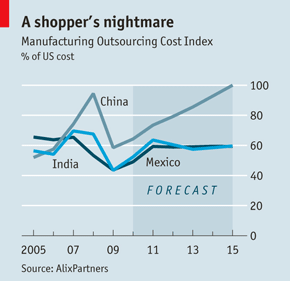 Despite this increase in manufacturing costs, manufacturing is unlikely to leave the country anytime soon. According to Hal Sirkin of Boston Consulting Group, companies are unlikely to leave China due to the increasing demand from Chinese consumers. He estimates that Chinese domestic demand is increasing at about 8-10 percent per year. All manufacturers need to do is adjust their manufacturing plants to serve the needs of Chinese consumers rather than western consumers. In addition, China offers more reliable suppliers of services involved in the manufacturing process compared to other developing countries. Other problems such as less efficiency and a lack of reliable supply chains usually offset the 30% difference in labor costs between China and cheaper countries. Similarly, China’s inland infrastructure and logistics are not developed enough for manufacturers to move west. Only firms planning to serve customers in inland China are likely to move away from China’s bigger cities. Although many low-tech, labor-intensive industries may soon leave China or move inland, high-tech equipment will remain on China’s coastline. China’s immense labor pool is much more productive and flexible than those of other countries and it remains cheaper than manufacturing in developed countries. Until a country can match China in not only price, but also availability of resources, the manufacturing industry is unlikely to leave China.